They are there. And you have seen them. Perhaps from a train as it lurches and jolts over the points and junctions outside a city terminus. A glance through the window and they emerge into view. Or, perhaps, on a busy street, you raise your eyes from pavement and shopfront to glimpse what you have never noticed before. Faded, translucent; pallid imprints on brick and stone. Maybe an advert, no longer shouting but whispering about a long-forgotten brand – clothing, cigarettes, flour, razors. Or a sign that tells of former use and occupancy: grocer, hostel, furrier. These are ‘vestiges of spaces and places, industries and individuals’ that tell stories of ‘history, identity, cultural memory, desire, nostalgia, and erasure’ (Shep, p.209).

The city, however, does not tell its past, but contains it like the lines of a hand, written in the corners of the streets, the gratings of the windows, the banisters of the steps (Italo Calvino, quoted in Shep, p.210) 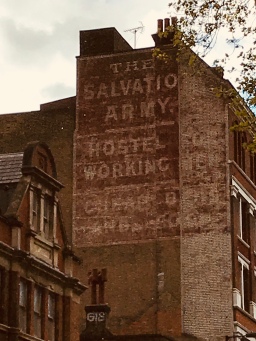 These signs – material and metaphoric – ‘both reveal and hide their identity’ (Shep, p.209). They exist in plain view yet their meaning has to be negotiated via erosion, neglect and decay. Like Baudelaire’s flaneur detective, we need to decipher and deduce (Benjamin, p.37). For these signs exist at the liminal convergence of topography, typography and temporality (Shep, p.210). They inhabit multiple margins; permeate many thresholds. And this very materiality is, of course, liminal. As scouring wind, rain and pollution ‘transform the qualities of matter’ (DeSilvey and Edensor, p.477), their journey of transition is constant: as ‘palimpsests, they register change over time’ (Shep, p.209).

These signs are also ghosts. And ghosts, we know, are spectres of the liminal. They are the ‘non-object, this non-present present, this being-there of an absent or departed one’ (Derrida, quoted in Orr, p.1055). They show us ‘that which appeared to be not there’ (Edensor, p.159). A brand of beer last drunk in the 1950s; a business whose final invoice predated the dot-matrix printer.

And there is something both poignant and heroic about these ghost signs. Even though their purpose – their signified is absent – they continue to signify to an intended audience that, in all probability, are ghosts now too. It brings to mind an abandoned turntable endlessly playing the same track to a long-departed listener. For these ‘names and slogans…were not meant for our contemporary eyes’ (Roberts and Marshall, p.3). And this, maybe, is what captures our gaze from train and street. This prickling of curiosity; a glimpse of something we can’t immediately comprehend yet sense, in some way, to be important. The sudden sound of static that interrupts our car radio on a moonless country road: significant but unknowable.

Such ghosts ‘haunt the present in such a way as to suddenly animate the past’ (Edensor, p.159). As I walk up the lane towards the sign of the former Chequers pub, I am conscious that my steps echo those of villagers who, for many years, would have tramped the same route after a day working the fields. And their embodied practices and daily rituals are now re-enacted by those now drawn by the sign.  The past is reinvented and reimagined with each step. As Edensor notes, we ‘perform the past by putting our bodies into its flow’ and, in so doing, ‘it ceases to be pure memory; it is lived in the present’ (Edensor, pp. 150-151). And these experiences, these micro-narratives we co-create through such embodied empathy, although fragmentary and seemingly incoherent, ‘offer opportunities for constructing alternative versions of the past, and for recouping untold and marginalized stories’ (DeSilvey and Edensor, p.471). The ‘enigmatic traces’ of the Chequers pub invites me to ‘fill in the blanks’ (Edensor, p.162). My imagination – via stories – aims to ‘impose a formal coherence on what is otherwise a flowing soup’ (Weick, p.128).

And confronted by ghost signs, maybe we too become liminal.  In Stefan Schutt’s account of ghost sign hunting through the streets of Adelaide, he speaks of an ‘initial sense of estrangement and disconnection’ (Schutt, p.55). It as if, gently shifted from our usual, habitual way of perceiving the world we become more attentive to those ‘talking walls’ (Shep, p.209). And, in becoming attuned to these new frequencies, this unfamiliar language, we are, momentarily, disorientated. Our senses are truly betwixt and between. Schutt reflects that in searching for old signs, ‘elements of serendipity and arbitrariness break down invisible barriers formed by habits of use, letting the walker see their environment in new ways’ (Schutt, p.54). This quest on foot is also a ‘space of enunciation’ that ‘affirms, suspects, tries out, transgresses, respects, etc., the trajectories it ‘speaks”(de Certeau, p.99). Here we find estrangement, enlightenment and transgression: the liminal experiences that our search for ghost signs engenders.

As a final reflection, we should not forget that in reanimating the past, urban ephemera also serve ‘to illuminate and transform the present’ (Massey, quoted in Schutt, p.57). For these signs gift us a warning. We are complacent in our organisations – comforted by the demand for products we make and services we offer – yet, if we glance in the shadows, the memento mori gather. Edensor identifies the mirthless irony of ghost signs faded to indecipherability – a bitter way to  mock ‘the energy expended on fixed meaning through branding and advertising’ (Edensor, p.162). Like the ochre and yellow wall paintings of the three living and the three dead uncovered from the peeling plaster of a medieval church, our ghost signs have an admonitory message: such as I was you are, and such as I am you will be. Organisations and institutions rise and fall. Products and brands come and go. Are we any different?

But maybe dissolution is not inevitable. Yesterday, I went searching for a particular ghost sign in Clerkenwell. However, this sign advertising the now vanished Black Cat Cigarettes brand has, itself, vanished. Completely hidden by a new residential block which has erased it from view.  But perhaps not erased from existence. Although hidden, it merely sleeps: suspended between past, present and future; revelation and enclosure; communication and silence. And, as fashions change, perhaps the new apartments that conceal it will, in their turn, succumb to the demolition notice. Then, as the wrecking ball strikes, the Black Cat – a typographical Sleeping Beauty – will wake again. And just as some deceased brands – like East Anglian beers, Lacons and Bullards (but alas not Morgans) – have risen like Lazarus from their corporate graves, so others may emerge blinking in the light. For, in the final reckoning, our signs are indeed ghosts; but ghosts who speak not only of decay and negation but of resurrection too.

Benjamin, W. (1983). Charles Baudelaire: a lyric poet in the era of high capitalism.Verso