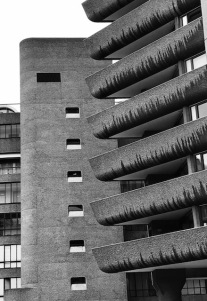 The Barbican in London is a source of solace. Walking the grey, water-stained ramparts, I feel protected by its coarse solidity. The hard, excoriating drag of bush-hammered aggregate reassures rather than pains. This is a place – fittingly given its name – of defence, retreat and enclosure.  In my more oneiric moments, I imagine a dystopian city of hand to hand fighting – a Stalingrad for a future age – with the Barbican providing the last refuge for defiance and resistance. With a morbid eye, I see the walkways and towers pitted by shellfire revealing the twisted steel rods within.

Given its genealogy, such a role is not mere fancy. In a beautiful yet unsettling book – Bunker Archeology – Paul Virilio charts through image and essay his fascination with the Atlantic Wall: 1500 World War II bunkers built to deter an Allied landing.  The stark concrete of these observation posts, towers, firing slits and embrasures are progenitors for Brutalist architecture. And the setting – the French littoral of Normandy and beyond – is of, course, liminal.  Beaches are a ‘perfect example of marginal, in-between spaces, zones of liminality that hold a fascination for many that few other landscape forms do’ (Meethan, p.70). Or, more disturbingly, they function as a ‘space of defamiliarization…marked by rough borders and unsolid ground.’ (Burleigh and Jung, p. 246). This unease is identified by Virilio who records:

looking out over the void, over this moving and pernicious expanse, alive with menacing presences; in front of the sea Hitler rediscovered ancient terror: water, a place of madness, of anarchy, of monsters

Several of these bunkers are themselves liminal. Slumped into the beach like fallen, hamstrung beasts, the boundary between sand and structure is in constant negotiation. With each tide, each storm surge their material identity – like those of any ruin –  is simultaneously effaced and remade. The simile of beasts also suggests something further. There is a robotic anthropomorphism to many of these bunkers. The prow and aperture of a control tower juts like a jawline with an open mouth above – these are Easter Island statues recast for the modernist age.

This humanisation of military architecture is also apparent in Sophia Davis’ experiential account of a walk around the abandoned secret scientific research stations on Orford Ness in Suffolk: ‘the laboratories nestle into the shingle, crouching and hiding behind it in comfort from intruding eyes’ (Davis, p.147). Yet there is nothing, I feel, comforting in such anthropomorphic imagery. For does it not emphasise this ‘space of defamiliarization’? Using Fisher’s definition of the eerie –  ‘there is nothing present where there should be something’ (Fisher, p.61) – the sentries, observers and soldiers that inhabited these bunkers are gone yet their absence is re-imagined (literally re-incorporated) into the features and posture of the structures.

And if we re-align our gaze on these bunkers – a metaphoric twist of the kaleidoscope perhaps – we gain a final perspective on their liminality. In a blog on Paul Virilio and accidental utilitarian art, A Year in the Country observes how these bunkers ‘could be artefacts from an almost science fiction-esque future that never was, a form of hauntology possibly.’  Or to put it another way: this is a zone where past, present and future elide.

Now, if we retrace our steps to the Barbican (which, if anyone familiar with the area knows, is often more difficult than it sounds), I see its inherent ‘bunkerness’ as infecting not just the immediate City but a world far beyond that. In every organisation, there are stories of the silo mentality – ascribed variously to individuals, departments, offices and divisions.  But surely, ‘bunker mentality’ is a far more apt term? The buttresses of these fortresses may be material – another office, a different floor – but equally they can be spatially ethereal, signified by a turn in the corridor perhaps or a different desk alignment on an open plan floor. And just as a different style or cut of uniform alert the bunker inhabitants to the presence of an alien, so here the signifiers are equally distinct. Professional jargon, acronyms, attire (the creatives in jeans, the management in suits?) serve as the poker ‘tells’ that warn the wary observer of our origins and organisational provenance.

But what do these fortresses protect; what do our bunkers defend us from? Virilio argues that just ‘as the eighteenth-century bastion materialized the ballistic systems of rudimentary artillery’ (Virilio, p.39), the bunker’s ’rounded or flattened angles, the thickness of its walls…its armor plating, iron doors, and filters’ were designed to hold up under a new climate of ‘shelling and bombing, asphyxiating gasses and flamethrowers’. However, for us, surely change is the threat our organisational bunkers are designed to repel.  That is the ‘climatic reality’ jeopardising the brightest jewel in our barbican’s strong room: namely the culture of our particular organisational tribe. What we are often mistakenly protecting is ‘how we do things around here’; that nebulous amalgam of values, beliefs, behaviours and norms.  New technology, processes, ways of working are, or so we perceive, the fire, poison and artillery that assail and threaten to change us. And so we construct our metaphorical bunkers.

Yet history shows that such an approach is flawed. For Virilio, the remnants of the Atlantic Wall serve as ‘funerary monuments’ (Virilio, p.29) and the sobering reality is our own bunkers threaten to bury not preserve us. They deter, repel and beat back – they are symbols of closure. But in an increasingly complex and volatile world, survival depends on open innovation and collaboration. And just as Virilio’s bunkers were often built with no foundations, our own bunkers are similarly constructed on mere sand. So, let’s join hands and leave our chthonic shelters, ammunition stores and dressing stations to emerge, eyes blinking, by the open seas and far horizons of our progressive futures. It is the beach, not the bunker, that will save us.