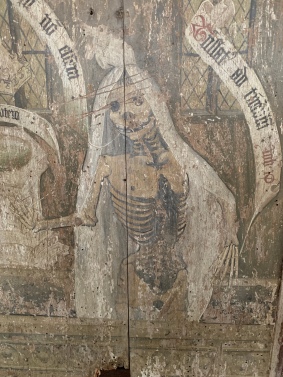 Ghost signs, as we have seen, haunt the margins of many zones. Here, fixed categories blur before our eyes. These faded imprints, inked or carved on shop face or wall, elide past, present, future, materiality, insubstantiality, presence and absence. To those that care to listen, they murmur of long-forgotten brands — cigarettes, flour, razors — or whisper stories of former use and occupancy: grocer, ironmonger, tripe dresser. 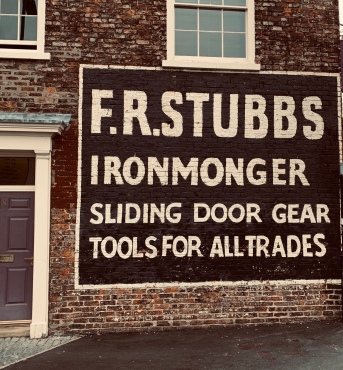 In their susurration, half-heard above the squeal and thrum of brake and engine, we learn that all things must pass: brands, products, services, companies. For we are complacent in our organisations — comforted by the diurnal rhythm of the work we do. But ghost signs teach us that the firms and institutions (and the buildings that enclose them) rise and fall. Products and brands come and go. We are eternally poised on the limens — the threshold to oblivion.

The ghost sign reveals the past speaking in the present to remind us of our transience and disclosing the future to show the decay and dissolution that awaits us all. And such dialogues connect us to older dialogue and these signs to older signs. For these contemporary memento-mori have spectral ancestors who still walk silently beside us today.

What I am, they were, and they are, I will be

The admonitory advice of the ghost sign can be summarised in the words of St Bernard of Clairvaux, quoted by Paul Binski in Medieval death: ritual and representation (1996). Binski argues that the theme of the transience of the world was deeply rooted in Judaeo-Christian tradition and that the Christian notion of the body as a sign was implicated in the emergence of the macabre — a period of European art that lasted for 300 years between 14th and 16th centuries.

And there is one motif within the macabre that pre-figures later ghost signs and provides resonance and context for what was to follow. It too warns against complacency, emphasises the ineluctability of change, stresses the criticality of remedial action and, in its physical manifestations, materialises and embodies the rise and fall of organisations. Yet this sign is also ambiguous.

The motif is that of the Three Living and the Three Dead and the story is a simple one. Three young men, often depicted as kings, are out hunting, dressed in their finery (the splendour of which indicates their social status and importance). These Three Living then meet three cadavers in various stages of decomposition. A dialogue ensues in which the living express fear and mortification while the dead exhort them to improve their ways and to reflect on the transience of their lives and the foolishness of their behaviour.

So to explore further, let me take you to a remote Norfolk church. It is late on a smoky, damp Autumn afternoon. Saturday perhaps. Dusk is falling and the only sound is that of crow in yew and foot on gravel path. We open the wire-door to the porch and fumble with the lock on the centuries old door to the nave. We step inside and this is what we see. 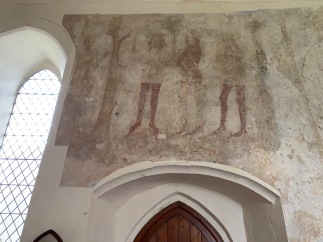 The encounter is a dialogue — and a dialogue by means of a doubled self. Mark Fisher, in The Weird and the Eerie, argues that the weird is the presence of something that should not be there. It is a ‘signal that the concepts and frameworks which we have previously employed are now obsolete’ (Fisher, 2016). And three decaying doppelgangers are not what our hunting kings expect to encounter.

And this unsettling, this disorientation, continues.

Binski explains how the image is ternary: it implicates us a viewer. We, as well as the three living are the recipients of the message. We are both inside and outside the scene, suspended in a hall of mirrors.

And this liminality proliferates. We see confusion of the animate and inanimate — and the reversal of initiative and agency as the regal hunters become the hunted.

We are also caught in a moment of instability between three temporal realms: as with ghost signs, the past imposes on the present to warn us of the future. 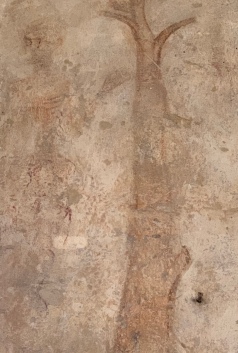 The scene depicted is topographically liminal. The forest is represented by bare, lifeless, skeletal trees. This bleak landscape echoes to the past and to the future. Back to the ‘marches…heath…and the desolate’ fens in which the ‘grim demon’ Grendel dwelt in Beowulf.  And, in its withered starkness, forward perhaps to the shattered fields of Flanders. This is  ‘no-man’s land’: a contested geography inhabited by the both the living and the dead but to which neither can lay ultimate claim.

Even the wall painting’s physicality is liminal as time, concealment, damp and neglect ‘transform the qualities of matter’ (DeSilvey and Edensor 2013). Such processes of decay mock any compulsion for order (Edensor, 2001). Where does bare wall end and image begin? Corruption erodes the boundariness of objects: they become something else. Like all liminal artefacts, they are betwixt and between.

This wall painting also — though its very materiality — speaks of organisational change.

Many wall paintings were destroyed by puritan reformers or, as with Seething and Wickhampton, whitewashed over.

The zeal of the puritans is also visible in the rood panel scene of the Dance Macabre at nearby Sparham church. The eyes of the skeletal bride and bridegroom have been gouged out — a treatment usually afforded to icons of the saints. 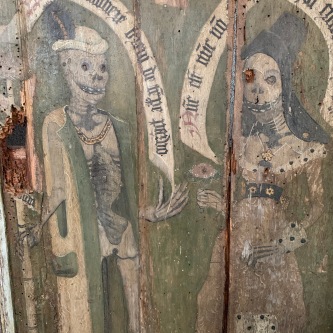 You could argue that this material disfigurement — like the effacement of the wall paintings — both embodies and reflects organisational transition. A mature and established market incumbent, the Church of Rome, has fallen victim to a hostile takeover by a brash young start-up: Reformation plc. The image’s vandalised materiality serves as a memento mori of the transience of organisational power and dominant market share.

But the message these ghosts bring is potentially more nuanced; more ambiguous.

This is an excerpt from the 15th century poem, The Three Kings — a retelling of the Three Living and the Three Dead — by John Audelay (translated by Giles Watson). The scene is vividly set:

And out of the grove, three men came into view:

With legs long and lean, and limbs all askew,

Their livers and lights all foetid…

The first king is cringing, his heart overcast,

For he recognises the cross on a rotting king’s shroud…

These dead are not just random ghosts. As the title suggests, they too were kings which makes them ancestors of the living Kings. And the first living king cringes because he recognises the heraldic sign on his ancestor’s rotting shroud. In a semiotic twist, the king’s identity has withered to a decaying sign. This connection is amplified by the second dead’s king assertion: we are not fiends, we are your fathers.

So, intertwined with the theme of transition and change is that of continuity. And the warning here, as Ashby Kinch identifies, is: do not ignore or debase one’s lineage (Kinch, 2008).

Consequently, dissolution may not prove inevitable. And, of course, some of the ghost signs we see relate to products and companies that have survived. 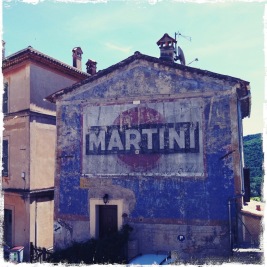 This ghost is still very much alive – the lineal line persists (‘any time, any place, any where’ perhaps). And the message to its organisational descendants is ‘remember your brand legacy’. By paying heed and respect to tradition, corporate identity (‘the cross on a rotting king’s shroud’) may endure and survive. But to do so requires agency and intercessory action and, if we fail in our duties, then purgatory — or something worse —awaits.

So, the lesson the macabre teaches us is that ghosts (and the signs they haunt) speak not just of decay and negation but of continuity too. And, in this ambiguity, the ambivalence of the message, they are, of course, truly liminal.

(Adapted from a paper – ‘A warning to the curious: ghost signs as liminal memento-mori‘ presented at the Standing Conference on Organisational Symbolism 2019, held in York, 9-11 July)

One thought on “Macabre”